Weather, Whether, Feather and ...

Today's weather began with freezing temperatures and sleet. It stuck on the walkways, driveways, and roadways. In other words: A free day with no plans or obligations!!! Yea!

Here's a photo from the front door (indicating the Weather) It was nearly noon and I heard a familiar "bump." If you feed birds in the winter, you will often hear that same sound... and you'll know that a bird has hit a window. Sure enough, I looked down and saw a nuthatch lying on the walkway in front of the living room window. It scrunched around a bit and then just laid in shock.


I ran to the bathroom for a lightweight towel and scooped him up in it.
This is the Whether... I brought him indoors for a moment until his little bright eye opened.
Then I set him, still loosely covered in the towel, just outside the door.


About an hour later, when I opened the towel,
this is what I found.


You're expecting the Feather, right? 
Here's a picture of our bird feeder. If you click on it, you'll see a nuthatch. He's not upside down, as they usually are...

Posted by Shady Gardener at 2:07 PM

Maybe it was a little parting gift to thank you for your kindness.

lol at the poop line above.

Something must be wrong with blogger because I can only see the pic of towel but I guess that's ok.

Though if it was me I would have run out and got a cig and a bottle of hard liquor and placed it near the bird to make it look like he had passed out drunk and snapped some pics.

Ha! And I didn't even GET a photo of the bird.

I must do something about the windows, though. I've seen some press-on "decals" that might help.

I can see the pictures now! :)

SG: I can also see the pictures now! You get a gold star for helping out that little bird! I guess flying into the window scared the **** out of him! LOL

Love the pic of the ice-coated branches. You're lucky you were able to stay home Saturday; I was at a Christmas lunch & had to spend an extra 20 minutes driving home on snowy expressways. If you can't find any window decals, you can use old CDs hung up outside the window. I'm glad your efforts for the bird were not wasted. Mr. Brown Thumb's photo idea is great!

I considered myself Very fortunate to be able to stay home Saturday! (My main obligation was canceled.) I'm sorry you had to be out driving. Glad you made it home okay!

Interesting idea about the old CDs. I'll see if I can try it!

It was it's way of telling you it loved you!!! I luckily haven't had to rescue any birds yet.. Yet being the key word,

That first shot is beautiful! I hate it when the poor creatures run into my huge bay window..it was nice of you to help the little nuthatch!!
Enjoy the weekend!
Cat

We had more snow... but not as much as we thought we might. Tonight, though, we're supposed to get ice. 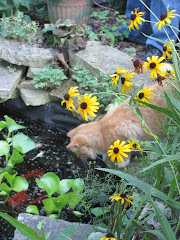 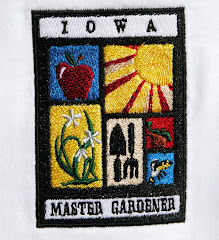 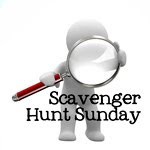 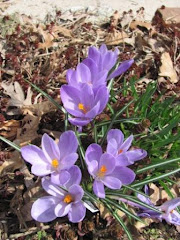